I’ve been learning Data Analysis tools (Jupyter and Pandas) recently, so I thought I’d have a go at pulling together some stats on Covid 19.

Some of the stuff online is pretty impressive. But there wasn’t much about Scotland specifically. I had a look for myself.

(It's difficult it is to find decent stats online. The UK government has been pushing for transparency and [open data](https://data.gov.uk/about) formats for a while now, and we've got some [nice looking websites](https://statistics.gov.scot/data_home) but finding anything useful has been...well, I've not found anything.)

I have found some great data from individuals such as Watty62. Impressed at their great work, gathering and tidying up the data.

Now, the number of new cases peaked at the end of March, around 30 days in and 10 days after we started isolating. But they have remained pretty steady since then.

I’m curious if the numbers are being inflated by an increase in the number of tests being carried out.

The percentage of cases identified in Scotland has been very similar to the UK wide stats, up until the last week or so. Does that mean things are improving in Scotland, maybe due to Scotland being less densely populated, or some other factor? 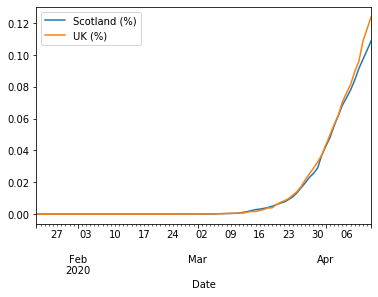 One of the big fears was that hospitals could be overrun. The number of cases currently in ICU appears to be flattening at just over 200. For comparison, the new hospital in Glasgow has capacity for 300 beds currently. So critical care capacity doesn’t look too bad. Hence, I guess, the focus shifting to other issues, like testing capacity and supplies of equipment.

Now I’m wondering how I can improve things. Is there anything interesting I can do with the data? Can I improve how it’s displayed?